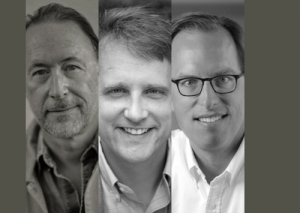 Pulitzer Prize finalist and acclaimed military historian James Scott will discuss Rampage: MacArthur, Yamashita, and the Battle of Manila, a definitive history of one of the most brutal campaigns of the Pacific, the bloody battle to retake Manila. Award-winning editor and author Hampton Sides examines his new book, On Desperate Ground, which chronicles the extraordinary feats of heroism by Marines during the greatest battle of the Korean War. Based on extensive archival research, war-crimes testimonies, after-action reports, and survivor interviews, both Rampage and On Desperate Ground recount heartbreaking and impressive chapters of the Pacific and Korean wars.

The two authors will be interviewed by and engaged in a lively discussion with James D. Hornfischer, author of multiple books on the United States Navy during the years of World War II. With these passionate and fiery speakers talking about such visceral pieces of American history, this is an evening you won’t want to miss.

The event is $5 for CLS members, $10 for nonmembers. To purchase tickets, call 843-723-9912 or visit charlestonlibrarysociety.org.

A former Nieman Fellow at Harvard, James M. Scott is the author of Target Tokyo, which was a 2016 Pulitzer Prize finalist and was named one of the best books of the year by Kirkus, The Christian Science Monitor and The Fort Worth Star-Telegram. His other works include The War Below and The Attack on the Liberty, which won the Rear Admiral Samuel Eliot Morison Award. His latest book, Rampage: MacArthur, Yamashita, and the Battle of Manila, will be released Oct. 2, 2018.

Hampton Sides is an award-winning editor of Outside and the author of the bestselling histories Hellhound on his Trial, Blood and Thunder and Ghost Soldiers. He lives in New Mexico with his wife, Anne, and their three sons.

James D. Hornfischer is the author of four books on the U.S. Navy during World War II. All New York Times best sellers, they have led reviewers to rate him as one of the most commanding naval historians writing today. The board of directors of the USS Constitution Museum recently presented him with the Samuel Eliot Morison Award for his work, which “reflects the best of Admiral Morison: artful scholarship, patriotic pride, and eclectic interest in the sea and things maritime and a desire to preserve the best of our past for future generations.”

His most recent book is The Fleet at Flood Tide: America at Total War in the Pacific, 1944–1945, a narrative of the final year of the war against Japan, from the seizure of the Marianas Islands to the atomic bombings and surrender of Japan. Hornfischer is a native of Massachusetts, and a graduate of Colgate University and the University of Texas School of Law. He lives in Austin, Texas, with his family.

About The Charleston Library Society