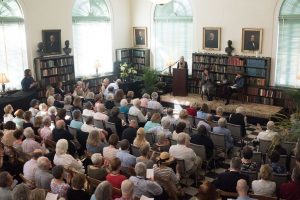 November is National Literary Month, and the Holy City is celebrating with two literary festivals: The Charleston to Charleston Literary Festival and YALL Fest, so it is the perfect time to make a trip to the Holy City. There’s something for the whole family.

The Charleston to Charleston Literary Festival bridges the connection between Charleston, SC, and Charleston, Sussex and arrives to town for the second time this November 8-11 to unite authors and readers from around the world for an intellectually stimulating weekend of lectures, discussions and elegant, fun-filled receptions. Last year’s inaugural festival brought Julian Fellowes, the creator Downton Abbey, among many other authors.

Some fast facts about those speakers:

YALL Fest also celebrates National Literary Month with the South’s largest young adult book festival. November 9 and 10 brings with it well-known young adult novelists for a weekend of panelists, book signings and events. Started by Blue Bicycle Books owner and Charleston local Jonathan Sanchez, the festival brings teenagers and authors from across the globe together to celebrate the power of reading. This year’s speakers have yet to be announced, but last year’s authors included Jesse Andrews, author of Me and Earl and the Dying Girl, and Becky Albertalli, author of The Upside of Unrequited.