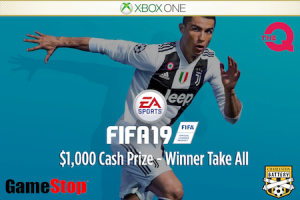 On Saturday, September 29th, the Charleston Battery will host a FIFA 19 XBOX Tournament in partnership with Game Stop inside the Three Lions Pub at MUSC Health Stadium. The player who finishes on top will take home a $1,000 cash prize.

Registration for the tournament costs $50 and includes a ticket to the Charleston Battery’s game that evening against Toronto FC II and your first beer/drink in the Three Lions Pub.

The tournament will be a group style bracket with 32 one-person teams. Each player will be randomly put into a four-team group and guaranteed three 12-minute matches. Players will advance based on their point totals (3 points for a win, 1 point for a draw, 0 points for a loss) from group play. Games that end in ties in the knockout rounds will go straight to penalties.

Players can choose any club team in the game, but cannot switch once the team is chosen. There will be six XBOX consoles set up, with games being played on each simultaneously beginning at 2 pm. Once the group advances to the knockout rounds, two of the consoles will be open for free play for eliminated players and spectators.