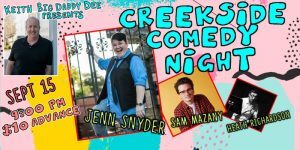 Don’t wait to get your tickets, the last five shows have sold out!