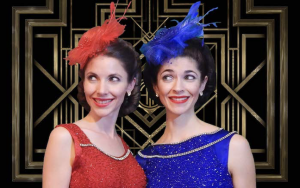 On Friday, September 7th, popular vocal duo Gracie & Lacy are giving Charleston a sneak preview of the show they will be performing at the legendary Broadway Supper Club in Feinstein’s 54/Below in New York City this September. The show and send-off party will be held at Bowties Speakeasy on James Island from 8 pm to 11 pm.


The duo will be joined by their 5-piece Legends Band comprised of musicians from the local jazz scene, including members of Charleston Jazz, The New South Jazz Men, V-Tones, Joe Clarke Big Band and more. Players include Boogie Woogie Bugle Boy Stevie B. on trumpet (Stephen Berry), and showman Bill McSweeney on the trombone. The rhythm section features fedora-wearing bassist Jeff Narkiewicz and the drumstick-wielding Brad Bolchoz. Big Band leader Joe Clarke will be showcased on the keys.
The show preview and send-off party will feature jazz hits from the Great American Songbook. Admission to the party is free and guests can purchase food and beverages from the Bowties menu.
Those who wish to see the show entitled “Great American Songbook LIVE” in New York, can visit Gracie & Lacy’s website for details: GracieAndLacy.com.