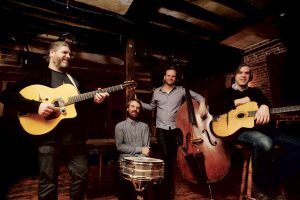 Wrembel is most known for his Grammy Award winning composition “Bistro Fada,” the theme song from the 2011 Woody Allen Oscar Award-winning movie, Midnight In Paris (2012 Grammy Award winner for best soundtrack). Subsequently, Wrembel was hand-selected by award winning composer/producer Hans Zimmer to perform at the 2012 Academy Awards as part of his “All Star Band.” Wrembel has contributed music to two other Allen films, commercials, and TV and has both a Clio Award and Grammy Award under his belt.

Runaround Sue Vintage will be all over Charleston this Month