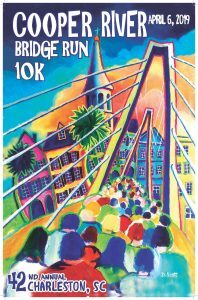 Drawing inspiration from great impressionist painters like Monet, Cezanne and Matisse, Stevenson’s rendering of Charleston (right), the bridge and the event’s participants is expressed through bright colors and playful lines. Stevenson, a graduate of The Art Institute of Pittsburgh, has created designs for L.L. Bean, REI, Major League Baseball, Princeton University and UCLA, among other Colleges and University. His art has also been used to endorse exhibits at the Smithsonian Institution, Air and Space Museum, Metropolitan Opera, and The National Zoo and Aquarium. Born in upstate New York, Stevenson has also lived and drawn inspiration from states like Maine, California and North Carolina. He currently resides in the Lowcountry of South Carolina.

“We are very excited about the outstanding artwork that we received from D. Scott Stevenson. It really conveys the excitement and energy felt by all of the people that attend our race,” said Smith. 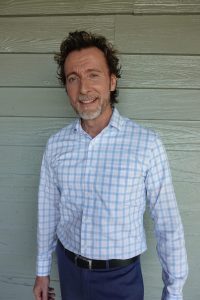 Stevenson’s artwork will be featured on all of the 2019 event t-shirts, posters and marketing materials for the third largest 10K in the country. He has also been awarded a $1,000 cash prize.

“The CRBR has such a fun spirit, something I tried to capture in my painting through bright colors and playful perspectives. This was my first year entering the CRBR Design Contest, and after seeing all of the great entries, I’m honored that my piece was selected as the official artwork for the 2019 event,” said Stevenson.

The CRBR Design Contest is an annual tradition that encourages artists from across the country to submit their artwork for consideration. This year’s contest featured more than 60 designs from artists of all ages and regions. A piece created by Mandi Heilig Boedicker was chosen as this year’s “People’s Choice” winner and moved on to the top 10 judging round. Other than the winner, all of the entries were auctioned off at the yearly “Unveiling” event and proceeds were donated to the CRBR charity partners. The winning entry will hang in the Cooper River Bridge Run office with past winners.

Follow us
Related Topics:cooper river bridge run
Up Next