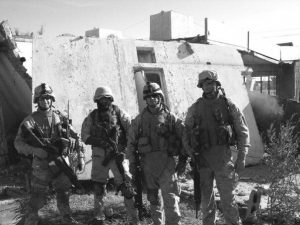 Several leaders of Echo Company, 2nd Battalion, 4th Marines, the Iraqi interpreter who worked alongside the American military forces, and a “Gold Star brother” will share their firsthand experiences of a fierce 2006 urban battle in Iraq in at a symposium aboard the USS Yorktown on Thursday, September 6th at 7 pm.

The symposium, entitled “Echo in Ramadi,” will provide unique perspectives of the 10-month battle on the streets of what was considered by many at the time as the most dangerous place in the world – Ramadi, Iraq.  The symposium will be based on the book of the same name, Echo in Ramadi, written by Echo Company Commander Major Scott Huesing, who will also serve as a panelist for the event.You can purchase the book here.

Joining Huesing will be two other Marines who served at the time in Echo Company and a Gold Star brother of one of the fallen Marines from the battle. A native Iraqi who served the U.S. military for three years as a combat interpreter will also share his experiences, and how he became a United States citizen.

The symposium is part of the ongoing “Ordinary People Doing Extraordinary Things” symposium series offered by Patriots Point’s Institute of History, Science & Technology. The event, sponsored by the USS Yorktown Foundation and BAIRD, is free and open to the public.

Public Courses Being Offered this Fall in the Building Arts