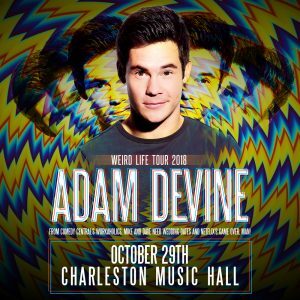 Comedian and actor Adam Devine will bring his “Weird Life Tour 2018” to the Charleston Music Hall on Monday, October 29th at 8 pm.

Devine is probably best known as a co-creator, writer, and star of the hit Comedy Central show Workaholics, for which he was named one of THR’s Top 50 Showrunners and one of Variety’s 2013 Ten Comics to Watch. You may also recognize him from Adam Devine’s House Party, as well as the recurring “manny” on the award-winning hit ABC series, Modern Family.

He has also appeared in films like The Intern, both Pitch Perfect movies, Mike and Dave Need Wedding Dates, When We First Met, and The Final Girls.

You’ll also be able to see Devine in HBO’s The Righteous Gemstones alongside Danny McBride and John Goodman. The project was filmed in Charleston.

Follow us
Related Topics:Adam Devinecharleston music hall
Up Next