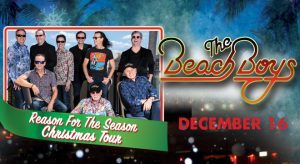 The Beach Boys will bring their “Reason for the Season” Christmas Tour to the North Charleston Performing Arts Center on Sunday, December 16th at 6 pm Tickets will be available on Friday, August 24th at 10 am.

As The Beach Boys mark more than a half century of making music, the group continues to tour and celebrate the California lifestyle and sound they are synonymous with.

The Beach Boys have sold over 100 million records worldwide and have received more than 33 Platinum and Gold record awards. The Rock And Roll Hall of Famers where also honored at the 2001 Grammy Awards with the Lifetime Achievement Award.

The Beach Boys are led by Mike Love and Bruce Johnston, who along with Jeffrey Foskett, Tim Bonhomme, John Cowsill, Keith Hubacher, Scott Totten, and Christian Love continue the legacy of this iconic band. This concert will not feature Brian Wilson, Al Jardine or David Marks.

Tickets will be available online, charge by phone 1-800-745-3000 or in person at the North Charleston Coliseum Advance Ticket Office.

Black Violin to Play the Gaillard Center in March 2019