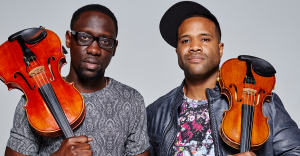 The Charleston Gaillard Center has announced that Black Violin, the hip hop duo from Florida comprising of two classically trained string instrumentalists, will perform at the venue on March 8th, 2019.

Black Violin is currently writing and recording their next studio album with a track and music video expected to be released later this summer. The band’s most recent record, Stereotypes, debuted at #1 on the Billboard Classical Crossover Chart and #4 on the Billboard R&B Chart. NPR praised the album and band, saying “their music will keep classical music alive for the next generation.”

Earlier in the year, Black Violin was announced as the Turnaround Artist for Mary B. Bethune Elementary School in their hometown of Broward County, FL. Turnaround Arts, a national education program of the John F. Kennedy Center for the Performing Arts, infuses arts into struggling schools to support overall reform efforts. Founded by President Obama’s Committee on the Arts and the Humanities in 2012, the program partners schools with music instrument grants, arts supplies, professional development, musicals, and pairs each school with an artist to provide mentorship, inspiration, and support for the school’s journey in the program. Turnaround Artists include Elton John, Edward Norton, and Yo-Yo Ma.

Black Violin is composed of Wil B. and Kev Marcus, who combine their classical training and hip-hop influences to create a distinctive multi-genre sound often described as “classical boom.” Black Violin has shared stages with top names including Kanye West, Aerosmith, and Tom Petty, and has creatively collaborated with the likes of Wu-Tang Clan, Wyclef Jean, and Alicia Keys.

In addition, the duo has performed for more than 100,000 students in the past 12 months throughout North America and Europe.

Tickets go on sale Friday, August 31st, but you can get pre-sale access by becoming a Charleston Gaillard Center Member. Contact their Development Office at development@gaillardcenter.org or (843) 579-6452 for more information.
–