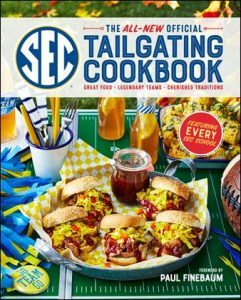 In the South, it’s said that college football is religion and every fall Saturday is sanctified. With The All-New Official SEC Tailgating Cookbook by the editors of Southern Living in hand, you’ll take your tailgates to biblical levels.

The ultimate guide to game day, The All-New Official SEC Tailgating Cookbook offers 150+ crave-worthy tailgating recipes, including those specifically developed for each of the 14 NCAA Southeastern Conference football teams.

From Alabama to Vanderbilt, each SEC team is profiled with information on school traditions, iconic football moments, legendary coaches and players, and photos. You’ll also find a menu of four recipes, plus a customized spritzer, jalapeño popper, and whoopie pie for each team.

Gotcha Recognized As One Of The Fastest-Growing Private Companies By Inc. Magazine