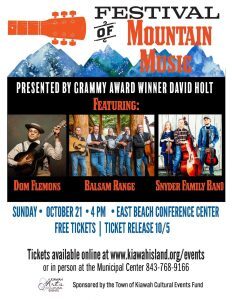 The Festival of Mountain Music will be held on Sunday, October 21st at the East Beach Conference Center on Kiawah Island. The event will run from 4 pm to 6:30 pm.

Free Tickets will be available beginning on October 5th at www.kiawahisland.org/events.

Get Your Salsa On During the 27th Annual Latin American Festival