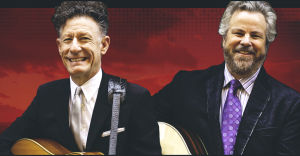 Country musicians Lyle Lovett and Robert Earl Keen are joining forces for an up-close-and-personal concert that’s coming to the Gaillard Center on Sunday, October 28th. The old friends are expected to swap songs on acoustic guitars like they used to do on Keen’s front porch in College Station, Texas, when they co-wrote “The Front Porch Song,” which both artists later recorded on their respective debut albums. Tickets for the show go on sale to the public Friday, August 17th at 11 am.

Since their debut, Lovett and Keen have collectively released nearly 30 albums. Lovett has won four Grammy awards while both he and Keen have been inducted into the Texas Heritage Songwriters Hall of Fame. The duo will perform acoustic, stripped-down versions of their most well-known songs, and share humorous and heartwarming stories.

Lovett is a singer, composer and actor that has released 14 albums over three decades. Among his many accolades, besides four Grammy Awards, include the Americana Music Association’s inaugural Trailblazer Award and being named the Texas State Musician.

Keen’s 30-year career has included 12 full-length and seven live albums. His music bounces between Americana and Country, but his most recent record, 2015’s Happy Prisoner, was strictly Bluegrass. The album hit No. 1 on Billboard’s Bluegrass chart.

Tickets for the pair’s Charlestons how go on sale Friday, August 17th at 11 am. You can get pre-sale access by becoming a Charleston Gaillard Center Member. Contact their Development Office at development@gaillardcenter.org or (843) 579-6452 for more information.