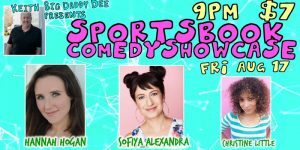 Tickets can be purchased here. The show begins at 9 pm.

Here’s how Dee describes each of the comedians:

Alexander is a writer and comedian who grew up in Odessa, Ukraine, and moved to Los Angeles at the age of 11. You might have seen her on Comedy Central’s This Is Not Happening. Currently, she’s a writer on Amazon’s Danger & Eggs, which was nominated for a Critic’s Choice Award for Best Animated Series. She was also named one of “The Fifty Funniest Women on Twitter” by Playboy and one of the “18 Funny Women You Should Be Following” by Huffington Post.

Hogan is a stand up comedian, writer, and actor based in Nashville, but is originally from Canada. She got her start in her native country, where she starred in two Canadian TV comedy shows, That’s So Weird and Meet the Family. While in Canada, Hogan also became a popular personality on the widely popular internet channel, The Gay Women Channel. She has performed at the prestigious Just For Laughs Comedy Festival and this year was on America’s Got Talent on NBC.

Easy-going, yet adorably snarky, Christine Little is a Los Angeles-based actress and comedian. Her playful comedy combines unique life observations with an animated presence. Little has been on FOX’s “LAUGHS” multiple times, has performed at comedy festivals all over the country, and opened for headliners such as Mad TV’s Bobby Lee. She’s also been featured on the front page of Funny or Die and The Huffington Post and is appearing on the new series, Alone Together.

Riley was a recent finalist in the Soda City Showdown stand-up competition. He can be seen performing all over Charleston. Originally from Ohio, Tanner is an avid sports fan and takes full advantage of the invention of air conditioning.

Disney On Ice presents Let’s Celebrate will visit the North Charleston Coliseum from October 27th to 30th. Tickets are on...