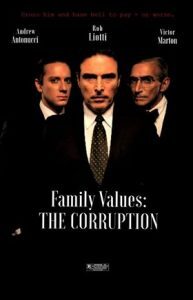 High Voltage Productions (HVP), based in Charleston, has announced a new feature film production that has been put into development. A sequel to their previously released, “Family Values – The Rise of Anthony Morelli”, the new film is entitled, “Family Values: The Corruption.”

The “Family Values” saga continues as slick gangster businessman, Anthony Morelli, “leverages his charm and sharp wit in his plan to take up residence in the South Carolina Governor’s Mansion…”

The initial installment of the saga turned out to be an unexpected success for HVP as the entire two-hour feature film was made for $300. In film making, an ultra low budget is considered to be $250,000 and below. Despite this, the film was been picked up internationally and by US network, Punch TV.

The production company is now talking with potential investors to commit to funding the film and getting it greenlit.

“Like any movie, some people love it and some people don’t,” Liotti said. “Like it or not, we made that movie for nothing. That is unheard of in today’s film market, so we could not be happier. However, the next film needs a budget. I want to increase the production quality and also bring in more seasoned actors.”