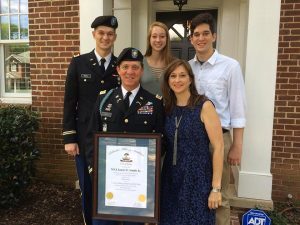 Major James E. Smith, Jr. was inducted Saturday into the Palmetto Military Academy Hall of Fame for his extraordinary “bravery and commitment” in military service.

The induction was held at the South Carolina Army National Guard’s training facility at Fort Jackson, in connection with the graduation of the 16 members of PMA Class 69. The Palmetto Military Academy, founded in 1950, is the Officer Candidate School of the National Guard, and is the second oldest such school in the country.

Smith, a member of the South Carolina House of Representatives and the Democratic nominee for governor of South Carolina, was the most junior officer of six PMA alumni inducted into the Hall of Fame Saturday.

The “justification narrative” for the honor told the story of how Smith, an attorney serving in the Judge Advocate General’s (JAG) Corps, sought to transfer to fight in combat infantry after the attacks of Sept. 11, 2001. He was told that in order to do so, he would have to resign his commission as a JAG officer, enlist, and go through basic training. He did.

He made it through, then attended PMA to regain his commission, only this time as an infantry officer. He graduated, then went through the Infantry Officer Basic Course at Fort Benning, Ga.

Smith went on to serve with his Guard comrades in combat in Afghanistan, where on March 8, 2008, he was wounded in action. In addition to the Purple Heart, he received the Combat Infantry Badge, the Bronze Star Medal, Meritorious Service Medal, Global War on Terrorism Service Medal, Afghanistan Campaign Medal and other recognitions.