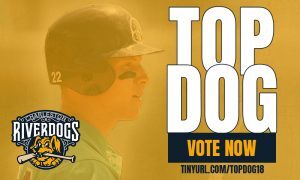 Four Charleston RiverDogs have put together seasons worthy of special recognition, but it will be left up to the team’s fan base to vote for the “Top Dog” of 2018. The finalists for Charleston’s fan favorite player of the season are: infielder Dermis Garcia, outfielder Pablo Olivares, catcher Jason Lopez, and starting pitcher Deivi Garcia.

Among the finalists, Dermis Garcia and Lopez are still on the active roster. Olivares was placed on the disabled list in mid-July while Deivi Garcia was promoted to Advanced-A Tampa on Monday where he dealt seven perfect innings in his Tarpons debut. Ballots may be cast until Friday, August 31 either online or in-person at the MUSC Health Fan Services booth at Riley Park. The winner will be announced on Charleston’s final home game of the season on Monday, September 3 as part of Fan Appreciation Night as the RiverDogs close out the season with a 2:05 p.m. first pitch against West Virginia.

Past Top Dogs have included Josh Hamilton, B.J. Upton, Aubrey Huff, Greg Bird, and Jorge Mateo. In 2017, Charleston’s Top Dog award went to outfielder Isiah Gilliam. The banners of past winners are displayed at The Joe alongside the previous winners.

Dermis Garcia, 20, joined the Dogs on May 17 after rehabbing an injury for the first six weeks of the season. After starting just 11-for-71 (.155), the slugger raised his average over .230 by the start of August, a stretch that included a season-best 11-game hitting streak and seven home runs in July. Overall, the D.R. native has 12 long balls and 30 RBI in 66 games this season. This is his second season in Charleston, as Garcia launched eight homers and driving in 20 runs in 30 games as a teenager in 2017.

Jason Lopez, 20, has played 72 games with the RiverDogs this season, catching in 65 of them. The Venezuelan backstop has been one of the top hitting catchers in the South Atlantic League, slashing .285/.330/.453 while ranking in the top-5 in average, OBP, and slugging among catchers with at least 150 plate appearances. The 20-year-old has eight home runs after never hitting more than one in each of his first three professional seasons. Lopez has hit .393 (24-61) since July 22, ranking third in the South Atlantic League over that span.

Pablo Olivares, 20, was poised to be arguably the best hitter in the league before an injury sidelined him in early July. Reassigned to Charleston on April 23, Olivares led the league in average over his 56 games in the Holy City, raking at a .338 clip and posting an OBP of .404 with four home runs, 26 RBI, 30 runs and 10 stolen bases. From June 1 through July 7, his final full game with the Dogs, the 20-year-old outfielder hit safely in 19 of 22 contests. After his departure from the lineup, the RiverDogs went on a 7-game losing streak and fell out of first-place after a 12-4 start to the second-half.

Olivares was named the SAL Player of the Week on June 25 after going 9-for-20 with three home runs and 11 RBI in the first four games of the second-half. He left the game with an injury mid at-bat in Columbia on July 9. Had Olivares finished the plate appearance, he would have qualified for the SAL leaderboard for the first time and would have ranked second among all hitters.

19-year-old Deivi Garcia is the lone pitcher in contention for the Top Dog award this season. The Bonao, Domincan Republic born pitcher racked up 63 strikeouts while walking just 10 in 40 2/3 innings with the RiverDogs. In his eight Charleston outings, the right-hander struck out at least six each time and set a new single game career-high with 12 punchouts against Augusta on July 25.

Garcia’s efforts got him promoted to Tampa on Monday where he delivered seven perfect innings and matched his personal best dozen strikeouts. The Tarpons failed to push across a run in Garcia’s debut, and he took a no-decision despite a combined eight inning perfect game.

RiverDogs single-game tickets, including options to the Riley Park Club, are available for the remainder of the 2018 campaign, the club’s 25th season as the RiverDogs and their “175th season in dog years.” Ticket information can be secured by contacting the box office at (843) 577-DOGS (3647) or online at www.riverdogs.com/tickets.