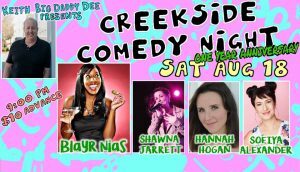 Creekside Comedy Night is celebrating its one year anniversary of hilarious stand-up comedy shows at the Creekside Kitchen and Brewhouse in West Ashley with another performance on Saturday, August 18th at 9 pm.

Nias, whose nickname is “GummyBlayr,” is a Massachusetts native who graduated from the George Washington University with a degree in Theater and Creative Writing. She has worked with comedy greats like Ralphie May, Tom Green, Bobby Collins, Gilbert Gottfried, Rachel Feinstein, Marc Maron, Jim Norton, DL Hughley, and Katt Williams. She has lived in the South for the past 10 years giving her a unique blend of Northern Aggression and Southern Charm.

In 2012, she was featured on the Pink Collar Comedy Tour at the Piccolo Spoletto Festival in Charleston. In May 2013, she won the “Best of the Best” Award for Best Twitter Feed presented by Charlotte Magazine and was also voted “Top 30 Under 30” by Elevate Lifestyle Magazine.

Alexander is a writer and comedian who grew up in Odessa, Ukraine, and moved to Los Angeles at the age of 11. You might have seen her on Comedy Central’s This Is Not Happening. Currently, she’s a writer on Amazon’s Danger & Eggs, which was nominated for a Critic’s Choice Award for Best Animated Series. She was also named one of “The Fifty Funniest Women on Twitter” by Playboy and one of the “18 Funny Women You Should Be Following” by Huffington Post.

Hogan is a stand up comedian, writer, and actor based in Nashville, but is originally from Canada. She got her start in her native country, where she starred in two Canadian TV comedy shows, That’s So Weird and Meet the Family. While in Canada, Hogan also became a popular personality on the widely popular internet channel, The Gay Women Channel. She has performed at the prestigious Just For Laughs Comedy Festival and this year was on America’s Got Talent on NBC.

Jarrett is the lead comic on the Charleston Comedy Bus, writes and produces sketch comedy, and hosts the monthly Get Up! Comedy Night at Tin Roof. She was nominated for Best Local Comic in the Charleston City Paper’s 2018 Best of Charleston awards.

Follow us
Related Topics:Creekside Comedy NightCreekside Kitchen And Brewhouse
Up Next