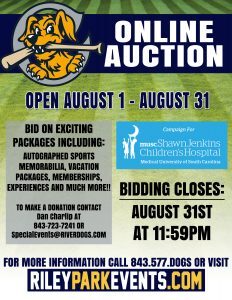 For the second straight year, the Charleston RiverDogs will host an online charity auction during the month of August benefiting the campaign for the MUSC Shawn Jenkins Children’s Hospital. Items are currently up for bid with additional items to be added throughout the month.

Here are a few highlights:

For more information and to view all auction items, go to http://riverdogs.milbauctions.com. Bidding is currently open and will close at 11:59 pm EST on August 31st. Winners will be notified with details on how to claim their items and packages.

For additional information about the online auction, please contact Lisa Dingman at (843)577-DOGS (3647) or visit www.riverdogs.com or www.rileyparkevents.com.