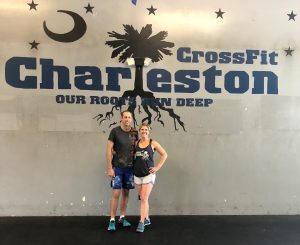 They purchased CrossFit Charleston from Joshua Hartzell, who helped start the local affiliate almost 10 years ago. Hartzell is a former active duty military veteran, private security specialist, and police officer. He accepted a new job opportunity out of state, so was looking to sell the “box” as it’s known in the CrossFit world.
With more than 80 members, CrossFit Charleston is located at 450 Deanna Lane off Clements Ferry Road in Wando. It offers a variety of group class times plus a detailed on-boarding process for those looking to try CrossFit for the first time.
CrossFit is a fitness regimen developed by CEO and founder Greg Glassman over several decades. CrossFit is defined as constantly varied functional movements performed at high intensity. All CrossFit workouts are based on functional movements, and these movements reflect the best aspects of gymnastics, weightlifting, running, rowing and more. All the WODs (workout of the day) are easily scaled to accommodate all fitness levels or physical limitations.
Clint Fisher is a cybersecurity contractor at Cambridge International Systems, supporting the U.S. Department of Defense. He became interested in CrossFit in 2010, earning his Level 1 certificate for coaching as well as certifications in CrossFit Mobility and CrossFit Endurance.
“I grew up on a small farm in Arkansas, working long hours outside. When I left for college and then later joined the Air Force, I never found anything fitness related that I really enjoyed or felt was really making me fit,” Clint Fisher said. “When I found CrossFit, it was like a homecoming, and it not only became my workout, but my lifestyle. If you want lifelong fitness and longevity, you can’t go wrong with CrossFit.”
Holly Fisher is the CEO of Fisher Creative, a marketing and public relations firm in Mount Pleasant. She attended her first CrossFit class in 2010 and was immediately hooked.
“I was never an athletic person who grew up playing sports, but when I found CrossFit, I became an athlete,” Holly Fisher said. “I love how CrossFit makes you better physically and mentally. And that’s largely thanks to the community of athletes at our local box. I’m excited to invite even more people into CrossFit Charleston where we can help them become the very best version of themselves.”
For more information about CrossFit Charleston, visit www.crossfitcharleston.fitness or call 843-790-5811.
–
Press Release