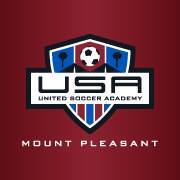 United Soccer Academy (USA), a Charleston-based soccer club, is one of only two clubs in the country to have two teams attend the U.S. Youth Soccer National Championship Series in Frisco, Texas. Both teams qualified for the tournament as a result of finishing as a top team in their National League season.

The 04 Boys team, coached by Matt Parmer and Robbi Arnold, qualified for the tournament for the first time in 2018. The team played three tough games but were ultimately knocked-out in the group stage.

“The previous success we have had ultimately meant that every time we stepped out to play, we got our opponent’s best game. Our guys lived up to the hype and represented our club extremely well,” said Parmer of the 04 Boys team’s performance. “Experiences like these for our team have helped raise the awareness of the high level of play our team is capable of — and we’re excited to come back next year to keep raising that bar.”

The 03 Boys team, coached by Sachin Patel and Ralph Lundy, participated in the National Championship tournament for the second time, winning their age group in 2017. This year they won the group with 2 wins, including a dramatic come-from-behind 3 to 1 victory. Advancing on to the semi-finals, they ultimately lost 2-1 in a repeat of the 2017 championship game.

“This week has been challenging, more challenging than last year,” said coach Patel. “There are no secrets and a lot of games have gone back and forth. Our boys have played incredibly throughout this whole tournament and we are confident that they will come back next year even stronger.”

“For these two teams to reach this level is an unbelievable accomplishment. There really isn’t much more these guys can do that would make us prouder of them,” said Matt Job, the executive director of United Soccer Academy. “These teams are representing our club in an incredible way. And what they’re able to accomplish speaks to the talent of our players, as well as to the quality of our coaches and the unique Lifetime Development Pathway we implement in our club’s training program starting at the youngest ages.”

The Lifetime Development Pathway is the club’s program for developing players from the youngest ages to graduating high school seniors. The club works with each player over his/her career to understand goals and provide feedback and assistance to achieve long-term success on the field and in life.

“You’d be hard pressed to find the level of coaching we have at USA anywhere else in the Southeast,” continued Job. “And the incredible amount of support we receive from both the families of the players and the Charleston soccer community as a whole cannot be emphasized enough. We are truly fortunate.”

The U.S. Youth Soccer National Championship Series is the country’s oldest and most prestigious national youth soccer tournament, providing approximately 185,000 players on more than 10,000 teams from U.S. Youth Soccer’s 55 state associations the opportunity to showcase their soccer skills against the best competition in the nation while emphasizing teamwork, discipline and fair play.

United Soccer Academy (USA) is an affiliate of U.S. Club Soccer, the United States Soccer Federation and South Carolina Youth Soccer Association. Based in the Charleston area, USA fields select boys and girls teams in the U13-U18 age groups that compete at the highest level in South Carolina and in other states. USA also offers a Junior Academy development program for U8-U12. With more than 100 players advancing to the collegiate level and 25 state championships in the past 10 years, the club has a proven record for success. Learn more at usamountpleasant.com or follow them at facebook.com/usamountpleasant, twitter.com/usamtpleasant or instagram.com/usamtpleasant.