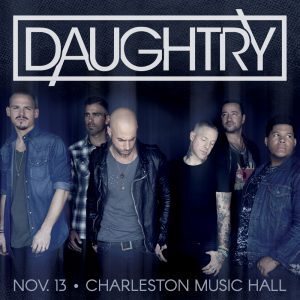 Daughtry, the a rock band fronted by former American Idol contestant Chris Daughtry, bring their “Cage to Rattle Tour” to the Charleston Music all on Tuesday, November 13th at 8 pm.

Since rising to prominence on the fifth season of American Idol, Daughtry has released four albums, all of which reached the Billboard Top Ten and have tallied combined sales of over 8 million copies in the U.S.

Daughtry’s self-titled debut was the best-selling album of 2007. It contained four Top Twenty hit singles including the Grammy-nominated smash “It’s Not Over.” Leave This Town also reached Number One in 2009, while 2011’s Break the Spell was certified gold. His group’s most recent record, 2013’s Baptized, featured the platinum-selling “Waiting for Superman.”

In addition his music career, Daughtry also took on the role of Judas Iscariot in the 2016 live television performance of The Passion, and even fulfilled a lifelong dream by drawing the cover of a Batman comic.