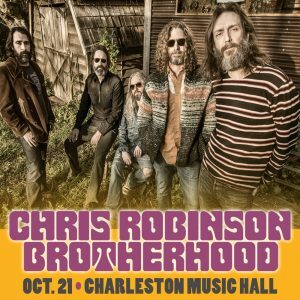 The Charleston Music Hall has announced that they are bringing back the Chris Robinson Brotherhood on Sunday, October 21st at 8 pm.

The band first emerged on the national stage in 2012 by releasing not one, but two acclaimed full-length albums within a few months of each other. Critics hailed their debut, Big Moon Ritual, as a revelation, with Uncut calling it a “tenderly-executed piece of work…[that’s] both earthy and transcendent,” while The Independent raved that Robinson had “finally found the ideal vehicle to indulge his taste for ‘Cosmic California Music.’” The reviews were similarly good for its immediate follow-up, The Magic Door, which was praised by Relix as “classic rock in the finest sense.”

Since that blistering debut, the Chris Robinson Brotherhood has release several more albums and toured the country nearly nonstop.

Follow us
Related Topics:charleston music hallchris robinson brotherhood
Up Next