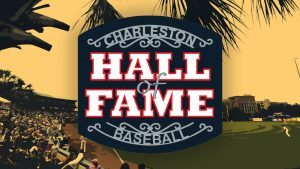 Jones and Stoots were selected by fan voting while Dudley was chosen by the Charleston Baseball Hall of Fame Committee.

The three new inductees will be honored prior to the RiverDogs’ Saturday, July 28 home game against Greenville at 6:05 p.m., and will have their names inscribed on the Hall of Fame list located on the main concourse of Joseph P. Riley, Jr. Park.

Lewis Elmore “Lukey” Dudley – Umpire:  Little League Boys Baseball, Dixie Youth Baseball.  1959-65: Charleston Playground (Locky Thackeray); 1965-late 70s: Mt. Pleasant Recreation Department (Dick Jones). Born with cerebral palsy in 1930 and not expected to live past his teenage years, Lukey worked as an umpire well into his 40s; upon being hired by Thackeray, Lukey read and reread the baseball rulebook until he had committed it to memory; he also always had a rule book in his pocket or nearby so that he could resolve any dispute or communication problem by telling the doubter to “look it up”; Lukey was cited as Charleston’s best umpire at the dedication of Hampton Park / McMahon Playground in 1999; was considered one of the best amateur umpires in Charleston.

Richard “Dick” Jones – Player:   A two-sport standout on the 1958-61 Citadel basketball and baseball teams, Jones was All-Southern Conference in baseball as a junior and senior with batting averages of .367 and .375 before he signed with the Cleveland Indians in 1961. A member of the Class of 1961, Jones was enshrined in The Citadel Athletic Hall of Fame in 1978. Jones was the first Director of Recreation for the Town of Mt. Pleasant and former Mayor of the town from 1984-91 before his passing.

Jerry Stoots. Coach:  Coached high school baseball for 45 years, notching 890 wins through the spring of 2018. He won nearly 600 games as the head coach at Stall High School (31 years) before exiting the SCHSL to coach at SCISA school Northwood Academy (11 years). He compiled 261 wins at Northwood Academy before retiring. He then became the head coach at Oceanside Collegiate, a SCHSL program, and now has 631 public school (SCHSL) victories officially. Coach Stoots led Stall to the Class AAA state title in 1985 and coached fifteen region championships; he took Northwoods Academy to five consecutive state finals appearances. He has been named Region Coach of the Year multiple times and the SCHSL AAA State Coach of the Year. Coach Stoots was elected into the SCACA Hall of Fame in 2008.

Follow us
Related Topics:charleston baseball hall of famecharleston riverdogs
Up Next