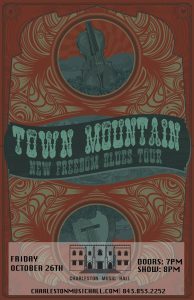 The Charleston Music Hall announced that Town Mountain will perform at the venue on Friday, October 26th at 8 pm. Tickets are $17 if purchased in advance online. A “dinner & show” option available for an additional $32. Tickets go on sale Friday, July 20th at 10 am.

Their 5th studio album, Southern Crescent, came out April 1, 2016 on LoHi Records. It debuted at #4 on the Billboard Bluegrass Chart while staying for ten weeks on the Americana Music Association’s radio chart Top 40.

Click here for tickets to their Music Hall show.
–

Follow us
Related Topics:charleston music halltown mountain
Up Next