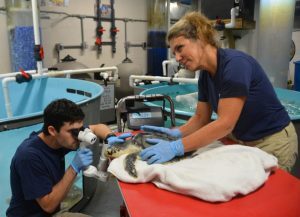 As usual, the public is invited to attend the event. Although viewing the release is free, attendees may have to pay for parking.

You can learn more about the turtles the South Carolina Aquarium’s Sea Turtle Care Center, and the Zucker Family Sea Turtle Recovery here.

The South Carolina Aquarium Sea Turtle Care Center has rehabilitated and released 256 sea turtles to date; Wednesday’s release will bring the total to 259.