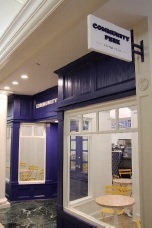 The casual coffee house will serve light fare, including items like avocado toast, bagels, sandwiches served with house truffle chips, in-house baked pastries, and ice cream. Coffee and espresso will be served from a variety of coffee beans ranging from light to dark including fair trade. The bistro will also have nitro cold brew coffee (a slow-steeped coffee infused with tasteless nitrogen leaving a smooth, creamy finish) on tap.

The most eye-catching part of Community Perk’s décor is the 75-foot mural painted by local artist Karl B. Smith (below). The mural, named “While I Breathe, I Hope,” features nearly 60 different historical landmarks, notable buildings, and symbolic icons representing the Lowcountry.

Community Perk replaced the retail space once occupied by Fresh Produce, which is now located at 218 King Street.  The coffee house, located in the East Gallery of The Shops at Belmond Charleston Place, officially opened its doors on Tuesday, July 17. They will be open seven days a week from 6 am to 4 pm.

Spero to Shutter After Saturday Service