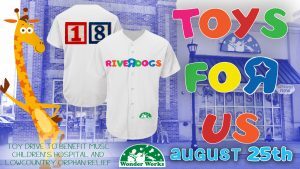 Amid the closing of the world’s biggest toy retailer, the Charleston RiverDogs are paying homage to the end of an era and celebrating the magic of toys. The team will turn The Joe into a place for all displaced toys from the shelves of Toys “R” Us both in the Lowcountry and nationwide, on Saturday, August 25th as part of “Toys foR Us” Night presented by Wonder Works at Joe Riley Park.

Geoffrey the Giraffe will be at the Joe welcoming kids of all ages, as the RiverDogs take the field in specialty toy-themed jerseys. With the help of Wonder Works’ toy experts, the Charleston club will reserve Section 122 as a toy-only seating area for the night and are asking fans to bring new and gently-used toys for the MUSC Children’s Hospital and the Salvation Army, in continuing its effort to find good homes for toys everywhere. Fans can also donate to the Toy Drive at three of the four Charleston area Wonder Works locations: Mt. Pleasant (Belle Hall Shopping Center), West Ashley (St. Andrews Shopping Center), and Kiawah Island (Freshfields Village).

In addition, the night will include a “golden ticket” drawing, in which attendees will have a chance to win one of three grand prizes – $500 shopping sprees at Wonder Works! And, Wonder Works Toy Experts will be showing off and sharing some of the magical toys available at Wonder Works.

The RiverDogs are also asking fans to share their favorite toys and trinkets on social media that they would like to see featured on the specialty jerseys for the night. The Dogs’ alternate uniforms will feature an alternate “backwards R” RiverDogs script complete with block lettering for numbers on the back. The rest of the uniform will be decided by the fans.

The magical night will begin with a ceremonial first toy toss from the mound, and finish with Fly-In Helicopters dropping 3,000 brightly-colored bouncy balls onto the field where one lucky fan will go home with up to $8,000.

The RiverDogs will be dishing out dessert specials from a very special Easy-Bake Oven concession stand, along with some of the other favorite childhood treats of the ’80s and ’90s. There will also be a jersey auction throughout the game with the proceeds going toward the Campaign for MUSC Shawn Jenkins Children’s Hospital.

First pitch is at 6:05 pm as the RiverDogs take on the Greenville Drive, the Class A affiliate of the Boston Red Sox. Click here for tickets.