ESPN Events has revealed the bracket for the 11th Annual Charleston Classic, which will be played on November 15th, 16th, and 18th at the TD Arena in downtown Charleston. The field of eight includes five teams who played in the 2018 NCAA Tournament.

The first round match-ups taking place on 11/15 are as follows:

The top half of the bracket will feature Ball State vs. Virginia Tech and Alabama vs. Northeastern. Alabama and Virginia Tech squared off in the first round of the NCAA Tournament back in March, with the Tide coming out on top in an 86-83 thriller. The Hokies return seven of its eight top scorers and come in at No. 14 in ESPN.com’s “Way-Too-Early” Top 25 Preseason Poll. Northeastern is a favorite in the Colonial Athletic Association (CAA) after sharing the regular season title last year, while Ball State has won at least 19 games in each of the past three seasons.

The bottom half of the bracket will play in the evening on Thursday and Friday, and includes Purdue vs. Appalachian State and Wichita State vs. Davidson. The Boilermakers return First Team All-Big Ten PG Carsen Edwards from last year’s Sweet 16 squad and are ranked No. 25 in the ESPN.com poll. Appalachian State is coming off its most successful season under fifth year coach Jim Fox and will be the first member of the Sun Belt Conference to play in the Charleston Classic. Davidson returns Atlantic-10 Rookie of the Year Kellan Grady from its conference championship team, while Wichita State earned its seventh straight NCAA Tournament bid as a No. 4 seed.

The bracket-format tournament features 12 games over three days. The teams compete once per day, regardless of results. The two unbeaten teams will face off in a championship game at 8:30 pm on Sunday, November 18th.

Tickets and further information can be found here. Click image below to see large version of the bracket. 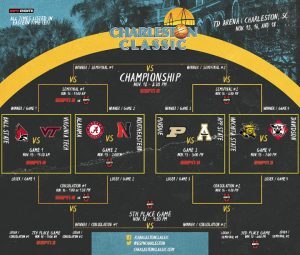