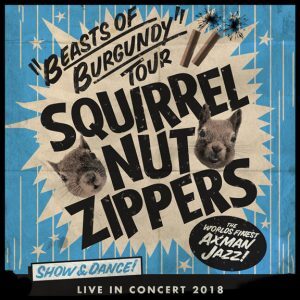 Squirrel Nut Zippers, the Chapel Hill band that first saw mainstream success in the 90s, will return to the Charleston Music Hall on Saturday, September 29th at 8 pm. The band last played at the venue in September 2017.

Between 1995 and 2000, the Squirrel Nut Zippers sold over three million albums. Their watershed album, Hot (1996) was recorded in the heat of New Orleans, fueled by a smoldering mix of booze and a youthful hunger to unlock the secrets of old world jazz. This passion mixed with klezmer, blues and random bits of contemporary musical leanings became the bands signature style. At the time, there were few other bands inhabiting this space. The album would eventually break free of any “jazz” stereotypes and land on commercial radio, taking the band to remarkable heights for what was essentially an anti-establishment sound.

Years later and through chronicles of every kind, the band has emerged from a lengthy recording hiatus, invigorated, invested, and rejuvenated. “It’s not a reunion, it’s a revival” has been the battle cry since the group was reformed in 2016. With an all star cast of New Orleans musicians, the band breathed new life in to the old material.

Tickets for the group’s Charleston show will be available beginning at 10 am on Friday, July 22nd. Visit the Music Hall’s website for more information.
–

Follow us
Related Topics:charleston music hallsquirrel nut zippers
Up Next

Extra Chill Fest at The Purple Buffalo on September 8th