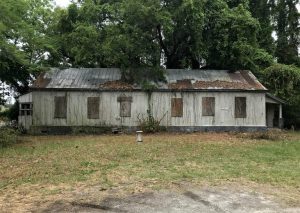 In the northwest area of Mt. Pleasant, where Interstate 526 and Long Point Road meet, there’s a tree-shrouded building with boarded up windows and vines growing over it. Thousands of motorists pass by it every day, most without giving it a second thought. But the hidden structure once sat at the crossroads of hope and opportunity at a very difficult time for African-Americans.

Dating to the 1920s, the Long Point Road Elementary schoolhouse, which served the Snowden community, a post-slavery settlement, is a rare survivor of a pre-integration school in the Jim Crow era. The College of Charleston’s Historic Preservation and Community Planning Program recently assessed the building with the hope of saving it from a contractor’s bulldozer. The four acres it sits on have to be cleared to make way for a new healthcare facility. 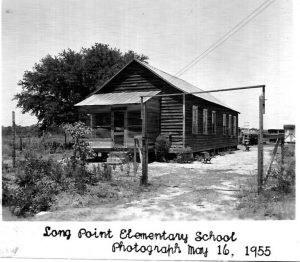 “The historical significance of this structure for the history of education not only in the region, but nationally cannot be overestimated,” Grant Gilmore, the program’s director, writes in his 19-page report. “It is a virtually intact artifact of one of the most pivotal periods in United States history. It is a physical manifestation of the challenges faced by formerly unfree African-Americans as they sought to improve their lives through education. It is also illustrative of the facilities provided by the State of South Carolina for African-American education. The transition to the Jennie Moore School from the Long Point Elementary School is illustrative of the long struggle toward equal rights for African-Americans in a political, social and economic environment that sought to restrict these rights at every turn through every means available. The building itself tells these truths and should be conserved and preserved as a precious reminder of this very dark period in American history.”

After the Jennie Moore Elementary School opened in 1953, the Mazyck family, which has owned the property for a century before the recent sale, converted it into a residence until 2000 when a small fire broke out inside.

“This is the first time that I have had the opportunity to document an old structure in the Charleston area. Thus, it is especially exciting for me,” says Gilmore, who has more than two decades of work in historic preservation in the Atlantic World.

“Grant and the students did a great job, very professional work,” says Freddie Jenkins, the president of the Snowden Community Civic Association. “They really enlightened us about its construction, like the saw-head markings on the lumber that date to a late 1800s circular saw.”

Gilmore has come up with a list of 20 recommendations to preserve and conserve the schoolhouse. First and foremost, of course, is to relocate the schoolhouse to the Snowden Community Center about a mile away, which will cost about $28,000, according to Jenkins. It will take another $175,000 more to restore the 1,500-square-foot structure, Jenkins says. Although the healthcare company, MemCare, has given Jenkins at least six months to get it moved while they obtain construction permits, the community has only raised $2,000 so far.

To contribute to the fund, make check payable to SCCA/Long Point School and mail to:

“We want to make it a focal piece of the African-American community,” says Jenkins, whose mother and aunt attended the school. “A lot of people really aren’t aware of this way of life after slavery, so we’d like to turn it into a cultural arts center where people can learn about these settlement communities and their culture.”

Osborne Takes Over as Interim President of College of Charleston