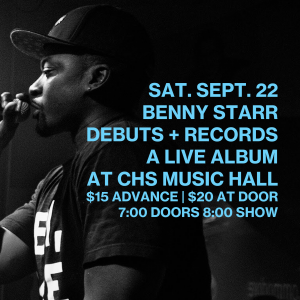 Local hip-hop artist Benjamin Starr will debut and record his sophomore release, A Water Album, live at the Charleston Music Hall on Saturday, September 22nd at 8 pm. Tickets are on sale now.

Starr’s reputation as a performer and musician has been growing for years through his singles, EPs, mixtapes, freestyle performances, and his 2015 debut LP, Free Lunch. The Charleston City Paper’s Kyle Peterson described the record as “a soul and R&B sample-infused effort that showcased the emcee’s formidable technical skills and keen political and social consciousness, music that harkens back to hip-hop titans Nas and Talib Kweli.”

Starr continues to further his reputation as a collaborator and community leader. In 2016, he released a live band EP with the Very Hypnotic Soul Band – a group of socially conscious artists who collaborate on a variety of projects, including the creative/political podcast Emcees & Esquires. Starr actively speaks and performs for community events such as NEA’s Big Read 2017 panel discussion with the Avery Research Center for African American History and Culture, the Vesey’s Resistance premiere, the Emanuel 9 Rally for Unity, the Southern Discomfort community forum, Rainbow Rowed (A Free Verse event), Piccolo Spoleto, TEDx Greenville, Pecha Kucha, and the Summer Shindig concert series.

“Music is deeply personal for me. After Free Lunch, I needed the time away from music to grow, and to feel; to love and to hurt; and I needed that time to discover and examine more of myself. I was luckily granted enough of those God-given moments to find the inspiration for A Water Album.

For this record, I’ve been blessed to work with many artists I have profound admiration for – both here in Charleston, and beyond. It is in that spirit of gratitude that I present this album to you, as I plan to not only debut A Water Album, but to also record it live, with the city that inspired much of its creation. I want Charleston to be a part of this recording – it is the only way I could imagine presenting this.”

For more info visit: www.BennyStarrSC.com. Tickets to the Music Hall show can be purchased here.
–

Squirrel Nut Zippers Return to the Music Hall in September