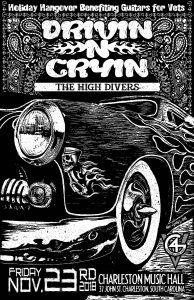 Drivin’ n’ Cryin’, an Atlanta-based southern rock act, returns to the Charleston Music Hall for a performance on Friday, November 23rd. The group last played at the venue almost exactly a year before this upcoming concert.


The band is celebrating their 33rd year together. During that time they have tallied a gold record, released 10 full-length albums, and had a documentary made about them. In 2015, they were inducted into the Georgia Music Hall of Fame.

Local band The High Divers will open the show. After a horrific crash while on tour last year – in which a semi-truck hit and flipped their tour van, injuring all band members and crew – caused an unexpected delay, the band at long last released Chicora, their follow-up to 2015’s Riverlust, on March 2, 2018 via True Blue Records.

Chicora takes its name from the Charleston neighborhood the band calls home, and it’s fitting, given they did all the recording in their living room. And although the album was already finished before the van accident, it also serves as a reminder of the community that rallied around the band in its time of need.

Tickets to the Music Hall show can be purchased here.
–