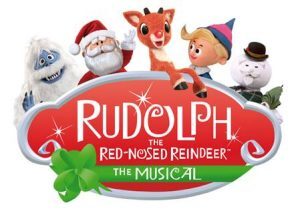 The “most famous reindeer of all” from the longest running and highest rated holiday television special in history is returning to the stage in the critically acclaimed Rudolph the Red-Nosed Reindeer: The Musical. The show will make a stop at the North Charleston Performing Arts on Wednesday, December 19th.

In 1964, the beloved stop-motion animated television classic, Rudolph the Red-Nosed Reindeer, made its network television debut and has been delighting audiences across the country for over 50 years. The story tells the tale of a young Rudolph who, because of the appearance of his bright, shining nose, is excluded from the reindeer games. He flees Christmastown and meets up with new friends Hermey the Elf and Yukon Cornelius. After finding The Island of Misfit Toys, Rudolph journeys home, where a snowstorm of epic proportions is threatening Christmas.

“Rudolph the Red-Nosed Reindeer: The Musical is a wonderful new way to experience this family tradition,” producing partner Jonathan Flom said in a press release. “This show entertains and, at the same time, helps spread the important and timeless message that we should celebrate our differences.”

Projections, costumes and characters are faithfully brought to the stage against a backdrop of nostalgic set designs. The cast brings high energy to classic songs and dialogue, while lovable puppets highlight the charming “roughness” from the television show’s stop-motion effects.

The production’s partnership with PACER’s National Bullying Prevention Center continues this year. The show offers a free toolkit to teachers that leverages the powerful messages from the Rudolph story to teach important character values.  In addition, a portion of proceeds from sales of the new book, T.E.A.M. Rudolph and the Reindeer Games, will be donated to PACER.

Follow us
Related Topics:north charleston performing arts centerRudolph the Red-Nosed Reindeer: The Musical
Up Next