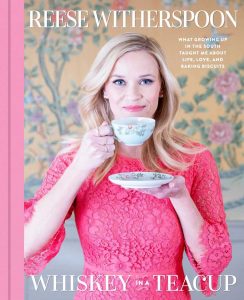 Academy Award-winning actress, producer, and entrepreneur Reese Witherspoon announced that her eight-city tour to support her debut book, Whiskey in a Teacup: What Growing Up in the South Taught Me About Life, Love, and Baking Biscuits, will include a stop at the Charleston Gaillard Center on Tuesday, September 18th.

During the event, Witherspoon will share personal stories and fans will hear how she entertains, decorates her home, and makes holidays special for her family. She will be joined by special guests for the conversations, and audiences will learn just how easy it is to bring a little bit of the actor’s world into their home, no matter where they live.

“My grandmother Dorothea always said that it was a combination of beauty and strength that made Southern women ‘whiskey in a teacup,’” Witherspoon said in a press release for the tour. “We may be delicate and ornamental on the outside, but we’re strong and fiery on the inside. I’m so excited to travel around the country and meet more strong women and share our stories.”

Each ticket for the Whiskey in a Teacup Tour includes a copy of the book (a $35 value). VIP ticket holders will walk away with a limited-edition Draper James tote bag filled with some of Witherspoon’s favorite products, a signed book, and a photo with Witherspoon.

Pre-sales for the Whiskey in a Teacup Tour begin on Tuesday, July 10th at 10 am. Tickets go on sale to the general public on Friday, July 13th at 10 am. Click here for ticket information.

Witherspoon won an Academy Award for her portrayal of June Carter Cash in Walk the Line and was later nominated in that same category for Wild in 2014, which she also produced. Her role in Wild also garnered Golden Globes, SAG, Critics’ Choice, and BAFTA Awards nominations. Her other film credits include Sweet Home Alabama, Legally Blonde, and Election. She has executive produced and starred in two seasons of HBO’s critically acclaimed Big Little Lies, with the first season winning eight Emmy Awards, four Golden Globes, four Critics’ Choice Awards, and two SAG Awards. In addition to her acting and producer roles, Witherspoon is also an entrepreneur. In 2015, she launched Draper James, a retail brand with a focus on fashion, accessories, and home décor inspired by the American South. In 2016, she established Hello Sunshine, a media brand and content company dedicated to female authorship and storytelling across all platforms. She is an advocate and activist for women’s issues across the globe. Whiskey in a Teacup is her first book.

If you can’t make the event, you can purchase the book here.