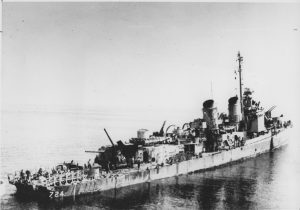 Patriots Point Naval & Maritime Museum invites the community to join them on Friday, July 6th at 9:30 am as museum staff and the U.S. Navy welcome a World War II veteran back aboard his former ship – the USS Laffey. Waitman Kapaldo is a member of the Laffey’s original 1944 crew. While on the ship from Feb. 8, 1944 to Sept. 24, 1945, he fought in several notable battles including the D-Day invasion of Normandy and the Battle of Okinawa.

During the Battle of Okinawa, Kapaldo helped defend the USS Laffey from more than 22 Japanese kamikaze planes that concentrated their attack on the destroyer. Six of those planes flew into the ship and three bombs were dropped on it.  During the 90-minute attack, 32 crew members were killed.

Kapaldo has not been back aboard the USS Laffey since his last day assigned to the ship in September 1945. More than a dozen family members will join him as he reunites with the historic vessel. Patriot Point will waive the cost of admission and parking for those who come to celebrate Kapaldo’s arrival.

“We want the Patriots Point pier lined with folks cheering as Mr. Kapaldo is led by the Navy Color Guard to the USS Laffey,” said Patriots Point Executive Director Mac Burdette. “We hope to make this a very special moment for one of our country’s World War II heroes.”

Upon Kapaldo’s arrival, Patriots Point will host a ceremony to honor the 32 crew members who were killed at Okinawa. Afterward, the World War II veteran will take part in a 30-minute meet and greet with visitors. Dick Whitaker, a Marine who fought on the island of Okinawa during the battle for 82 days, will also attend the ceremony.