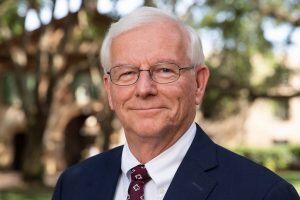 Stephen C. Osborne became the interim president of the College of Charleston on Monday, July 2, 2018, following the retirement of President Glenn F. McConnell ’69.

Osborne, however, is not new to the College, having served as a senior advisor to McConnell for the past year and before that as executive vice president and chief financial officer for the College from 2006 to 2017.

As he takes the helm of his beloved alma mater, Osborne shared some details about himself and his plans for the College in the coming months as the Board of Trustees works toward identifying CofC’s 23rd president.

How do you feel about assuming the role of interim president of the College of Charleston?

I know that being president carries a tremendous amount of responsibility with it. I’m excited to be put in this leadership role and honored to be asked to fulfill this position by the Colleges’ Board of Trustees.

How are you approaching your new role? What are you most looking forward to?

I’ve been at the College of Charleston for nearly 12 years in the administration, and I feel like I know the operation of the College fairly well. As president, I’m going to do a lot of listening. We’ve had listening sessions for what our campus community is looking for in the next president and how she or he can help improve the College, and that’s given me some ideas as to what I can do during my time as interim president.

I’m looking forward to getting to know as many people as possible and working together with our remarkable students, faculty and staff to continue moving the College forward.

What are your plans for the College during your tenure?

When I first thought about what I wanted to tackle as interim president, I made a list of five areas. That list soon became 10 areas. I’ve been able to regroup the list of 10 into four buckets:

While a number of these initiatives are already underway and ongoing, these are areas I want to have an impact on as well as where I feel I can truly help enrich and elevate our university.

As an alumnus and the parent of an alumnus, what is so special about the College that it keeps drawing you back?

The College is really a special part of me. I received a great education here; in addition, my college years were also a really formative time of my life. I still have great relationships with many people who I went to school with at the College.

When my son, Stephen C. Osborne II, was considering colleges and universities to attend, I encouraged him to look at several different schools. He knew about my campus experience and decided to add the College to his list even though we were living in Columbia at the time. After he did his campus tour, it was over. He fell in love with the College and the rest is history. Stephen graduated in 2006 with a bachelor’s degree in business administration.

My older brother and niece also graduated from the College, and I have a nephew who is currently enrolled here.

What did you enjoy most about being a student at the College in the early ’70s?

Life at the College in the early ’70s was an interesting time. The College was still quite small with an enrollment of around 1,000 students. Rapid growth was taking place during that time. I lived in Craig Union (now Craig Hall) my first year, off-campus my second year, and in Silcox Gym during my third and final year. Silcox housed the basketball team at the time, and I served as team manager. It was a very active political climate at the time, the aftereffects of the late ’60s were still very much alive, and the Vietnam War was at its height.

What I enjoyed most was an environment where I knew most of my classmates and professors, which gave me an exceptional education and a lot of great memories.

Rumor has it you had a nickname in College. What was it?

Almost everyone that I was friends with had a nickname. Mine in College was Oz. Many people still call me Oz today. I encourage our campus community to call me President Oz whenever they see me on campus or at events.

When you’re not on campus, how do you spend your time?

I spend time with my family. I’m an avid reader, and I like to play golf and watch a lot of sports.

Are there any TV shows you absolutely must watch, binge-style or otherwise?

Do you have a favorite book?

All the King’s Men by Robert Penn Warren. It’s my favorite book because it’s a great novel that provides a lot of  insight into politics and what motivates people in positions of power.