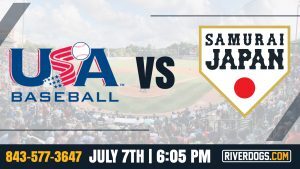 As previously reported, the 42nd Annual USA vs. Japan Collegiate All-Star Series will make its way to Riley Park on Saturday, July 7th, with first pitch scheduled for 6:05 pm. The game will bring many of the most talented underclassmen that collegiate baseball has to offer to Charleston for the international event.

The USA Baseball Collegiate National Team is currently comprised of 29 student-athletes, which will reduce to a 24-man roster for the July 7th contest.

Two North Carolina natives and NC State hitters are on the current squad, including ACC Freshman of the Year, Patrick Bailey, and Kings Mountain product Will Wilson. Bailey, a switch-hitting catcher, raked at a .321 clip with 13 home runs, 40 RBI, and 45 runs in his debut season with the Wolfpack while ranking among the top 10 hitters in the ACC. Wilson was named first-team all-ACC team this season for his .307 average, 15 home runs, 53 RBI and 50 runs scored. Wilson, a freshman All-American in 2017, helped lead NC State to a #3 seed in the ACC Tournament as a sophomore. Fellow ACC stars include lefty Drew Parrish and right-hander C.J. Van Eyk, both from Florida State.

USA’s roster is loaded with pitching, including Perfect Game/Rawlings first-team All-American Kyle Brnovich. The Elon right-hander posted an 8-2 record with a 1.71 ERA for the Phoenix in his sophomore campaign, striking out a conference-best 147 batters in a league-high 105 innings.

Ole Miss reliever Parker Caracci recorded 10 saves for the Rebels this season, helping match a program record 21 saves. The right-hander was named to Team USA’s roster the same week that he was named a second-team All-American by Baseball America.

The All-Star Series will feature appearances by former Clemson skipper Jack Leggett and former Citadel infielder and current Louisville Coach, Dan McDonnell, who will meet with fans along with players for pregame autographs and batting practice.

Leggett guided the Tigers to six College World Series appearances and 23 NCAA Tournament appearances during his tenure at Clemson from 1994-2015. He was three times named the ACC Coach of the Year. McDonnell, a Citadel grad who was part of the 1990 CWS run with the Bulldogs as a player, is about to enter his 13th season at the helm of Louisville, already having led the Cardinals to four World Series berths, including in 2007 when he was named the National Coach of the Year.

Tickets to the event and RiverDogs single-game tickets, including options to the Riley Park Club, are now available for the 2018 campaign, the club’s 25th season as the RiverDogs and their “175th season in dog years.” Ticket information can be secured by contacting the box office at (843) 577-DOGS (3647) or online at www.riverdogs.com/tickets.

USA Baseball is the national governing body for the sport of baseball in the United States and is a member of the United States Olympic Committee and the World Baseball Softball Confederation.  The organization selects and trains the World Baseball Classic, Olympic, Premier12 and Pan Am teams (and all other USA Baseball Professional Teams); the USA Baseball Collegiate National Team; the USA Baseball 18U, 15U and 12U National Teams; and the USA Baseball Women’s National Team, all of which participate in various international competitions each year.  The organization is responsible for the continued proliferation and health of the sport and leads a number of amateur initiatives including PLAYBALL and Pitch Smart.  USA Baseball also presents the Golden Spikes Award annually to the top amateur baseball player in the country. For more information, please visit the organization’s official websites: USABaseball.com, USABaseball.Education, PLAYBALL.org, PitchSmart.org, GoldenSpikesAward.com and USABaseballShop.com.