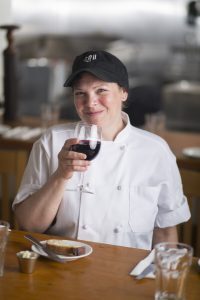 Chef Rachel Blumenstock has been named Chef de Cuisine of Cru Café. She began her culinary career at a bagel shop in Rockland County, NY. She fell in love with cooking and moved to Charleston to attend Johnson and Wales Culinary Institute.

Her career in Charleston began at Rue De Jean and she then joined the team at Cru Café shortly after they opened in 2002. After a short stint back in her home state of New York, Blumenstock rejoined the Cru team in 2011.

She was recently named Chef de Cuisine and according to a press release, she couldn’t be more proud to put her stamp on the Charleston institution that is Cru Café. She takes special pride in her gnoochi and loves to look out from her kitchen and see guests at the chef’s counter.

You can learn more about Cru Café here.