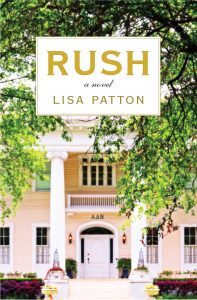 On Tuesday, September 18th, the Charleston Library Society welcomes author Lisa Patton for a book signing event from 6 pm to 7 pm. The event is free and open to the public.

Patton will discuss her new novel, Rush, which delves into the traditions, relationships, and collusions of big university sorority life in the South. It also develops commanding themes of racial exclusion and social injustice. A press release went on to say the following about the novel:

“Wide-ranging age, economic, and social differences among the three characters who tell the story of Rush create tremendous tension as many in a class of freshman girls hope to become sorority sisters on the University of Mississippi campus. Miss Pearl, the dearly loved African American housekeeper at the Alpha Delta Beta House, yearns to become the housemother to earn more income and return to college herself, but faces a roadblock from bigoted House Corp President Lilith Whitmore. Cali Watkins, a freshman without the pedigreed background of the typical sorority recruit, faces condescension from supercilious girls. And Wilda Woodcock, an Alpha Delta alumna lacking in self-confidence, succumbs to the dominating and arrogant Lilith Whitmore’s influence.”

Patton is the bestselling author of Whistlin’ Dixie in a Nor’easter, Yankee Doodle Dixie, and Southern as a Second Language. Born and raised in Memphis, the author graduated from the University of Alabama where she was a sorority member. The inspiration for Rush came after she visited her sorority’s new, $14 million sorority house and unexpectedly spent a good portion of the day getting to know the beloved housekeeper.