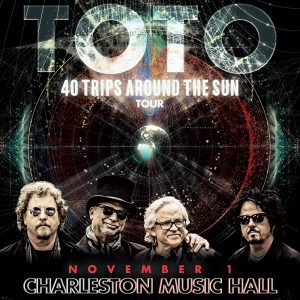 The Charleston Music Hall will present TOTO: 40 Trips Around The Sun Tour on Thursday, November 1st at 8 pm. TOTO, the legendary, Grammy Award winning group is in the midst of a resurgence thanks to the band’s brand new Greatest Hits package titled 40 Trips Around The Sun, which debuted in the Top 40 in eight different countries.

Few ensembles in the history of recorded music have had a larger imprint on pop culture than the members of TOTO.  As individuals, the band members can be heard on an astounding 5,000 albums that together amass a sales history of a half a billion albums. The band has over 400 million streams on Spotify with views on YouTube that far exceed over a half billion. They have released 17 studio albums, and sold over 40 million records worldwide.

With over 40 years together and literally thousands of credits, including the biggest selling album of all time: Michael Jackson’s Thriller, and accolades to their names, TOTO remains one of the top selling touring and recording acts in the world. They are best known for their hit singles “Africa,” “Rosanna,” and “Hold the Line.”

TOTO also recently announced the release of their definitive box set, All In, which is still available for pre-order here.

Tickets for their Charleston Music Hall show can be purchased here.

Press Release Continuing their growing artistic and cultural partnership that elevates overlooked historical figures and issues important to the Charleston...