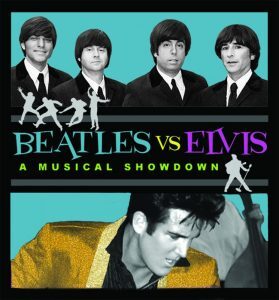 Beatles or Elvis? Who was the real King of Rock ‘n’ Roll? Two of the greatest musical acts of all time face off in a musical showdown on Sunday, August 12th at the Charleston Music Hall courtesy of the nationally touring Beatles tribute band Abbey Road and Elvis tribute musician Scot Bruce.

During the two-hour show, the bands will perform three sets each, trading places in quick set changes and ending the night with an all-out encore involving both bands. There will be a lot of good-natured ribbing between the bands as well.

The Charleston show is part of a 125 city tour of the U.S., Canada, and Australia. “Beatles vs. Elvis – A Musical Showdown” at 7 pm at the Charleston Music Hall. Tickets can be purchased online, by phone at 843-853-2252, or at the theatre box office.

The show is appropriate for all ages. Tickets go on sale on June 18th.

Beach Movie Night Is Back at the Tides Folly Beach