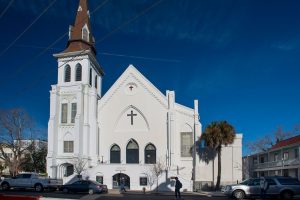 “As the third anniversary of the tragedy approaches, several organizations have partnered with the A.M.E. Church of South Carolina, the Mother Emanuel AME Church, and the city of Charleston to provide opportunities for citizens to engage in meaningful dialogue about unity among all races,” said Rev. Eric Manning, pastor of Mother Emanuel AME Church.

“In addition to honoring the lives and legacies of the Emanuel 9 each year during the month of June, we are committed to speaking out against gun violence each and every day and striving towards achieving racial reconciliation,” Manning said.

The following events are sponsored by, and will take place at, the Mother Emanuel AME Church, located at 110 Calhoun Street, unless otherwise noted:

The following events are sponsored by Charleston community organizations:

The roots of EAMEC run deep in Charleston and its history is one of perseverance in the face of racial hostility. The church is affectionately called Mother Emanuel because it is the oldest A.M.E. church south of Baltimore. The congregation first formed in 1791, a coalition of free blacks and slaves. In 1818, the church joined the A.M.E. connection. In 1822, the church was burned to the ground, after plans for a slave revolt were exposed. The congregation rebuilt the church and met there until 1834 — when all-black churches were outlawed by the state legislature. Undeterred, members continued to meet in secret until the end of the Civil War in 1865, when they formally reorganized. They adopted the name ‘Emanuel,’ meaning “God with us.” At the time, the church was a wooden two-story structure, and was destroyed in an earthquake in 1886. Once again, it was rebuilt. During the Civil Rights Movement of the 1960s, Mother Emanuel was the location for many of the meetings held by Martin Luther King, Jr. and others.  Today, we continue to be a church with a national and international reputation for forgiveness and grace. With seating for 1,200, it has the largest seating capacity of any African-American church in Charleston. It was added to the National Register of Historic Places in 1985. For information, contact Ms. Sylvia Blake, Executive Assistant to the Pastor at 843-722-2561.

Music Hall to host “The Greatest Love of All: A Tribute to Whitney Houston”