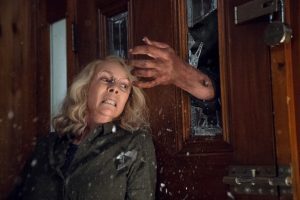 The trailer for the eleventh installment in the iconic horror franchise Halloween was released this past Friday. The movie was filmed throughout the Charleston area, so you’ll likely recognize a few places featured in the preview (below).

This Halloween was written by David Gordon Green, Jeff Fradley, and Charleston resident Danny McBride. The pair have previously worked together on the movie Pineapple Express and the TV shows Eastbound & Down and Vice Principals – the latter of which was also filmed in the Charleston area.

Fans of the classic film will be happy to know that Jamie Lee Curtis reprised her role as Laurie Strode, while Nick Castle returns as Michael Myers. John Carpenter, the director of the original movie, served as an executive producer on the remake. The film also stars Judy Greer, Andi Matichak, and Will Patton.

The new movie takes place forty years after the events of the original film and ignores the previously released sequels in the franchise. Halloween will be released on October 19th.