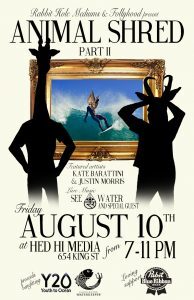 The original “Animal Shred” project examined the zoomorphic characteristics and soul that each surfer displays in their approach to riding waves. Barattini has partnered with water photographer Justin Morris to bring two portrayals of the series – one photographic and the other painted visual works. The pair has worked together for many years on various surf-inspired projects and are inviting the public to celebrate their latest series with a late summer party.

Ten percent of anything sold during the event will go to Y2O (Youth to Ocean) and Charleston Waterkeeper.