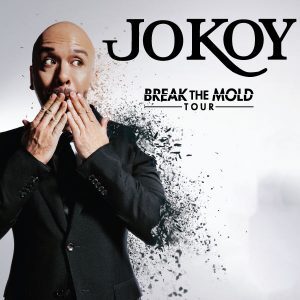 Comedian Jo Koy will bring his Break the Mold Tour to the North Charleston Performing Arts Center on Friday, September 7th at 7:30 pm.


Tickets will go on sale Friday, June 8th at 10 am at the North Charleston Coliseum Advance Ticket office, online at Ticketmaster.com or charge-by-phone at 1-800-745-3000.

Koy first rose to prominence in 2005 after an impressive performance on The Tonight Show with Jay Leno. He his one of just a handful comics to receive a standing ovation on the show.

Since then, Koy has had two highly-rated and successful specials on Comedy Central, Don’t Make Him Angry and Lights Out. In 2017, Koy released his third comedy special, Jo Koy: Live from Seattle, as a Netflix Original.

Today, the comedian tours across the nation and can be heard as a weekly guest on the popular podcast, The Adam Carolla Show. Koy recently joined the Podcast One family and hosts the weekly podcast, The Koy Pond.