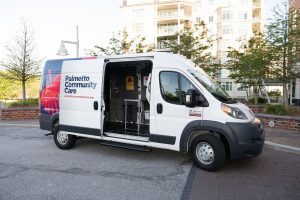 This summer, Palmetto Community Care (formerly Lowcountry AIDS Services) is hitting the road with its new mobile testing van, making it easier than ever for Charleston area residents to get a free, confidential HIV test. This van – aimed at reaching rural and high-needs communities – was made possible by a $50,000 grant from the Elton John AIDS Foundation.
Palmetto Community Care’s prevention team is taking the van to nightclubs, community centers, health fairs, special events and select Walgreens locations around the tri-county area. The nonprofit has expanded its focus on testing, outreach and HIV prevention education to rural areas of Dorchester and Berkeley counties as well as targeted high-risk communities in Charleston County.
Palmetto Community Care is also kicking off a June promotion encouraging people to come by for a free HIV test for a chance to win two tickets plus a parking pass for the Jay-Z and Beyoncé On the Run II Tour in Columbia. The concert is at 7:30 pm on Tuesday, August 21st at Williams-Brice Stadium.
Anyone who gets tested between June 4 and June 28 will be entered into the drawing for the concert tickets. The winner will be randomly drawn and notified on June 29.
Also, June 27 National HIV Testing Day – a nationwide effort aimed at raising awareness about the importance of HIV testing and early HIV diagnosis. The 2018 theme is “Doing It My Way, Testing for HIV.”
“We know it can scary to get a HIV test. But knowing is half the battle. That’s why we’re taking our mobile testing van everywhere we can to make it as easy as possible for anyone in the Charleston region to get a free HIV test. Our prevention team is here to make the entire process easier and to provide valuable resources and information on sexual health and safer sex,” said Adam Weaver, prevention manager.
In January 2018, Palmetto Community Care recorded the most positive HIV tests in its history. Of those who came in for a free HIV test in January, seven tested positive for HIV. Underscoring the issue that HIV is disproportionately impacting youth, all seven of those people were under the age of 30. In all of 2017, 20 people tested positive for HIV at Lowcountry AIDS Services. The agency tests an average of 1,600 people annually.
Palmetto Community Care offers free, confidential testing for HIV as well as syphilis and chlamydia at its office located at 3547 Meeting Street Road in North Charleston. Testing hours are 8:30 am to 3:30 pm on Mondays, Tuesdays and Thursdays and until 6 pm on Wednesdays. No appointment needed. Free condoms are available even if you don’t get tested.
Regularly scheduled stops for the Palmetto Community Care mobile testing van are:
For information on how to schedule a stop with the mobile testing van, contact Adam Weaver, prevention manager, at aweaver@palmettocare.org. There is no charge to have the van at a business, health fair or community center.
–
Press Release