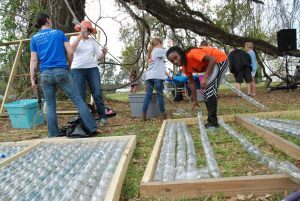 An arts program at St. James-Santee Episcopal Church kicks off the Piccolo Spoleto Festival on May 25th with a new building installed on Wragg Square in downtown Charleston — a greenhouse made from recycled water bottles and local bamboo constructed by Smash Glass Art Studio.

Melanie McClellan-Hartnett, Smash Glass Director and member of St. James-Santee Episcopal, launched Smash Glass Art Studio four years ago. The studio’s name refers to the smashing of barriers between people, as well as the smashing of literal glass.

The studio’s recent project, the “Oasis” installation at Piccolo Spoleto, is the kind of project that helped Smash Glass receive a $15,000 Roanridge Trust Award grant from The Episcopal Church, which was designed to encourage creative models of leadership development, training and ministries in small towns and rural communities.

In McClellanville, hundreds of volunteers spent hours making the “Oasis,” which consists of more than 3,900 water bottles and will be on display from May 25th to May 28th.

“We weren’t really sure if the greenhouse project would even work,” said McClellan-Hartnett. “After the first thousand, we began to understand how many water bottles we use, which started to align with our dream of bringing people together to make art, build community, and care for the earth.”

The grant and project’s collective goal was to overcome the barriers of race, age, income and education often found in rural communities. Volunteers ranged from children crafting an “Octopus Garden,” to adults and seniors constructing plastic walls.

“Relationships are every bit as important as what we’re trying to build,” said McClellan-Hartnett. “People might disagree on art, but it brings them together and breaks the barriers.”

The grant will also help the studio offer a three-month program for 100 individuals, which will provide hands-on training for those interested in forming their own programs in other locations, as well as create a video and online manual for those unable to travel to McClellanville.