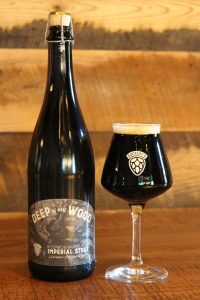 Dockery’s on Daniel Island recently announced the release of their first house-bottled beer – Deep in the Wood Bourbon Barrel Aged Stout. The release of this 750ml bottle marks the beginning of bottle and can sales at brewery. In addition, crowlers, an oversized can of fresh beer to go from Dockery’s taps, will go on sale beginning the same day. Bottles and cans will only be available at brewery.

To celebrate their first bottle release, Dockery’s brewmaster Dustin Wilson will be giving out samples of Deep in the Wood at a small release celebration on the brewery’s pavilion. He’ll give a quick, informative talk about the brewing and aging process that yielded six barrels of the dark, malty brew. The release tasting will be on May 23rd from 6 pm to 7 pm, with a free sample of the brew given to guests aged 21 and over.